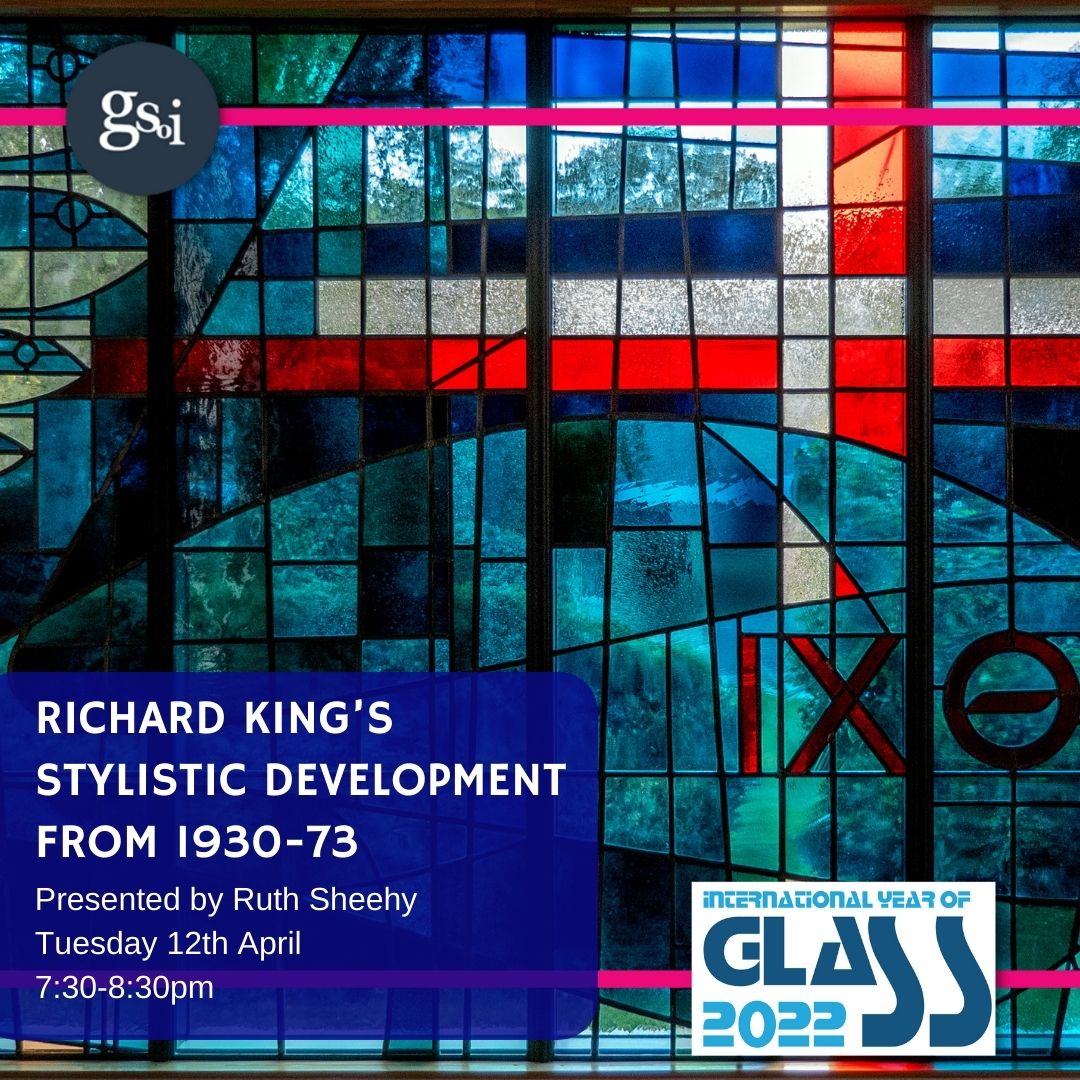 Richard King’s stained glass for churches in Ireland and overseas & artistic influences that formed his development.

This lecture focuses on Richard King’s commissions for Catholic churches in Ireland and overseas. Artistic influences that formed his development such as his mentor Harry Clarke and other Irish modernist stained glass artists such as Evie Hone, will be discussed.

Religion which was the main theme of his stained glass windows, revealed King’s interest in the Scriptures and theology. During the 1930s-40s, nationalism reflected his understanding of Irish identity. This was expressed in King’s only secular stained glass work The Kevin Barry Memorial Window (1932-34) in the Charles Institute of Dermatology, UCD.

King’s art from the late 1940s to early to mid 60s, involved experimentation and eclecticism in style and technique in order to discover his own artistic identity. His engagement with modernism from the late 1940s onwards, was shown by cubism, expressionism and abstraction in his stained glass windows from the mid to late 1950s to the early 70s. Vatican II (1962-65) and King’s reading of the theological writings of Pierre Teilhard de Chardin SJ, contributed to his profound and authentic interpretation of religious themes in his late stained glass from the mid 1960s to early 70s.

Ruth Sheehy is an art historian and Slide and Photographic Librarian emerita in the Department of the History of Art and Architecture, Trinity College Dublin. Her catalogue raisonné of The Paintings of Richard King for The Capuchin Annual was completed in 1992. She was awarded an MLitt (NUI) from the School of Art History and Cultural Policy, UCD, in 2007, for her thesis The Religious Art of Richard King in Ireland: 1933-73. This thesis formed the basis for Sheehy’s monograph on The Life and Work of Richard King: Religion, Nationalism and Modernism, published in the Reimagining Ireland series by Peter Lang International Academic Publishers, in January, 2020. Sheehy has published articles on Richard King’s stained glass and religious art in Ireland in Studies and Cathair Na Mart. She was also a contributor to the Gazetteer of Irish Stained Glass Revised New Edition, published by Irish Academic Press in 2021.