GSoI: Looking back on Orientate (Part 2) 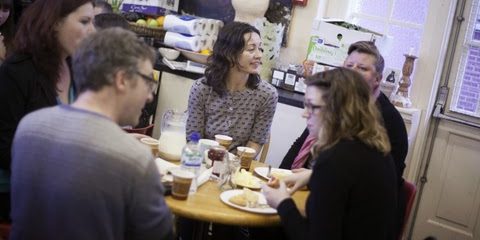 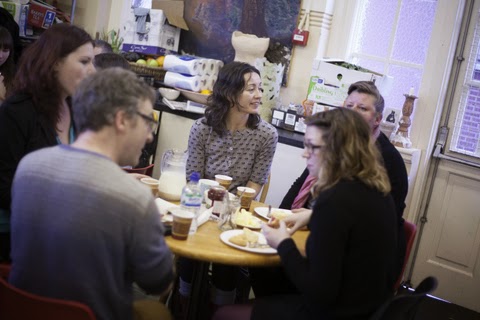 Mmmmmmmm… So lunch was delicious, all were in agreement on
that point. The cosy atmosphere of the canteen also provided a good opportunity
for guests, speakers and board members alike to relax and discuss the
conference so far. We felt that this was a very important element to include in
the day. Opportunities for the Irish glass community to mingle are rare enough
and we wanted to ensure the day left some room for everyone to re-connect and
make some new connections.
Lunch finished and food digesting nicely we made our way
back to the lecture hall. While the first half of the conference featured talks
from speakers whose professional careers had been led by glass/craft but did
not work with the material directly, the latter half was devoted to artists
working with glass specifically.

First up was the wonderful Angela Thwaites. Angela is a
glass artist, researcher and teacher based in London. She works predominately
in kiln-cast glass and has been involved extensively in numerous research
projects on refractory mould making for glass.
She talked about her practice and the development of her career which
began with an undergraduate degree in glass and ceramics from Farnham College
of Art and Design, Surry. A monumental point in her career occurred in 1983
when she was awarded a scholarship to study under one of the all-time masters
of glass casting; Professor Libensky. After receiving three more consecutive
scholarships, she completed her MA at the Academy of Applied Arts in Prague in
1985.

Angela pointed out that the meaning of orientate is ‘to determine one’s
position with reference to another point’.
She described her extensive career as a journey where, “each experience
leads to another.” Her study period under the Czech master was a pivotal point
in her practice. After it she was part of a research project at the Royal
College of Art and in 2010 she was commissioned to write a book Mould Making for Glass which followed on
from the findings of the project. She reminded us that any small opportunity
such as a conversation at a conference perhaps or an exhibition call, could
lead to the next important step in our careers. She also stressed that an open mind
and willingness to never stop learning are paramount to progression.

The other area of Angela’s career which she feels has really brought her many
valuable experiences is teaching. Angela is currently senior lecturer in Design
Crafts at De
Montfort University, Leicester and a tutor at Richmond Adult and
Community College. In addition, she has taught at numerous institutions as a
visiting lecturer and continues to teach workshops and master-classes in glass
casting internationally. She finds teaching very rewarding and feels she often
learns as much from students as they learn from her. We were delighted to have Angela
teach a casting workshop in NCAD just prior to the symposium. She truly is a
passionate and engaging educator. All the workshop participants enjoyed her
warm, relaxed manner and genuine enthusiasm towards their casting projects. In
addition to her teaching duties Angela works from her own studio which is
slowly taking over her back garden. She is currently working on several
projects, assisted by her cat!

Our second practitioner talk was from Slovenian artist and designer Tanja Pak(pronounced Tanya). Tanja is currently head of the glass and ceramics programme
at the Academy of Fine Art and Design in Ljubljana, Slovenia’s capital. Tanja’s
talk was entitled ‘Immersed in Duality’ and she focused on her relationship
with glass as both an artist and a designer.

Her work is influenced by the rhythm and flow of the natural
world. She works from a restrained colour pallet; black, white and transparent glass,
so nothing distracts from the organic simplicity of her forms. Tanja began her
career as an industrial designer, graduating in 1994 from the Academy of Fine
Arts and Design in Ljubljana. This initial training in design is evident in how
her complex ideas are simplified and expressed as functional glassware which is
manufactured in collaboration with Slovenian glass factories. The glass
tableware is functional and stylish and has received honourable mentions in the
Red Dot Design Awards. While it is very commercially successful, evidence of
the artist’s passions and influences still remain. The design of the vessels
echo water drops and ripples. Graceful curves and soft lines give these
manufactured pieces a very organic and feminine feel. Tanja does not see a
difference, as such, between her practice as a designer and as an artist. The
same inspirations create both lines of work; they are two sides of the same coin
and walking the line between them is an exciting challenge for her.
There is a meditative quality to all her work – quiet and
still, a frozen moment. It is most evident in her large installations which are
often immersive environments incorporating smells and sounds as well as
lighting and visuals. An example of one such installation was Within at Ljubljana Castle, 2010. This
work featured cast glass branches, illuminated within wooden ‘trees’. The room
was darkened and visitors’ footsteps muted by the chipped bark across the
floor. The bark also filled the room with an earthy smell, further enhancing
the illusion of being in meditative woodland. The atmosphere Tanja creates in
her installations is one of tranquillity and reflection. She uses glass for its
special relationship with light which becomes part of the complete experience
of the work. “Glass for me”, she said, “is pure poetry”. Her talk showed
numerous slides and videos of her installation but I imagine they cannot
compete with seeing the work in person – I hope I get the chance to do so one
day.
Wrapping up a very successful and informative day was CappyThompson who came all the way from her native Seattle, Washington, USA. Cappy
is regarded as one of the world’s best glass painters, a master of the grisaille or
gray-tonal painting technique. However, the material glass or the technique she
uses is not of central importance to her. Cappy is first and foremost a painter
and what is important is the narrative content of the work rather than its
canvas. She is self-taught in glass working, beginning as a stained glass
painter. Her initial paintings were influenced by folk art and mythology. While
the design of her imagery still references this style of drawing the content
developed to become entirely her own and is drawn from her personal life
experiences and dreams.
Cappy’s lecture dealt with her beginnings as an artist and
then traced the development of her style and career through the content of her
work. The audience, at least many that I spoke to afterwards, were really moved
by Cappy’s lecture. It caught you off guard; one minute she would be telling a
cheerful anecdote about an element in the story, the next moment she would
reveal a very personal and painful memory. Her talk was warm, sincere and
unassuming and I think it really allowed the audience to connect with the work
she shared with us. The narrative style of her work easily captures the
imagination, enriched by the detail and jewel-like colours. Hearing the story
behind each of the characters she paints makes the beautiful work even more
appealing.
Cappy has been producing her unique work for over thirty years
and in that time she has taught workshops internationally in major glass
institutions. We at GSoI made the
most of Cappy’s visit to Ireland – she taught a great workshop at the National
Sculpture Factory in Cork before the conference and another great one to the
National College of Art and Design glass students the week after in Dublin. It
wasn’t all work though, she did get to see Cork, Dublin and lots of beautiful
Irish countryside while she was here and we assure you, she said she really
enjoyed her stay!
When the talks finished up we headed over to Tactic Gallery
at Sample Studios for the opening of Sofie Loscher’s exhibition Waiting in the Wings. Sofie’s exhibition
one of two exhibitions curated by GSoI’s
vice-chairperson Emer Lynch to coincide with the symposium. Our guest speaker
Jerome Harrington formally opened the exhibition after a brief curator’s speech
from Emer. Conference guests and speakers had a chance network and mingle a
little more at the exhibition with a well earned cold beer. The second exhibition
in the ‘Orientate’ visual arts
programme, These Liquid Brinks featured artist Caroline Doolin and was opened at The Guesthouse on Sunday November 3rd
with a tea and cake reception. The exhibitions were very well received – but I
won’t say more than that because Emer has promised me a much more exciting article
discussing both them and her work as a curator in more detail in the New Year,
thanks Emer.
‘Orientate’ was a
great success for the GSoI in 2013.
Many thanks to all who were a part of it and cheers to something even better
next year!

About the author
Meadhbh McIlgorm studied glass at the National College of Art and Design and
graduated in June 2013. She is the GSoI Media
and Communications Officer; those of you present at ‘Orientate’ would have
seen her at the registration desk and the rest of you are probably familiar
with her monthly e-bulletins and notifications.
She is currently Artist in Residence
in the NCAD glass department.
Category: News, UncategorisedBy GSOI admin17th December 2013
Tags: Artist TalksCo. CorkConferencesCraftCrawford collegeEventsGlassGlass news InternationalGlass news Irelandglass society of IrelandGSoILectures
Share this post