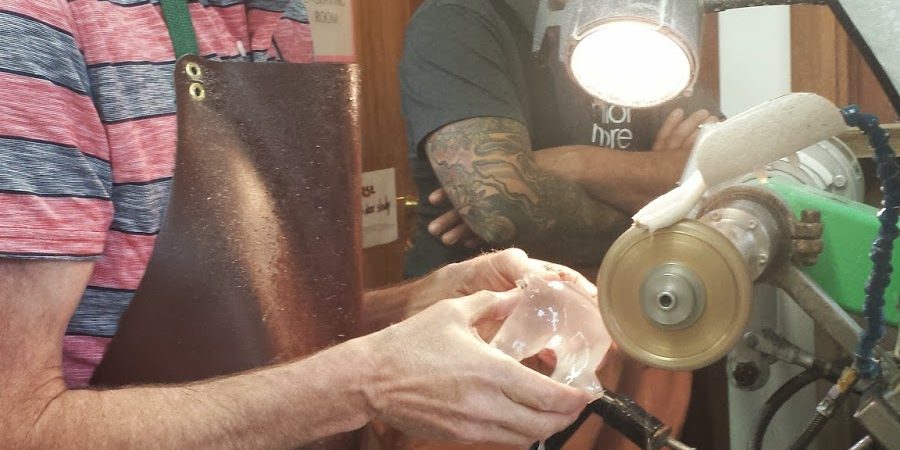 Unlike other summer classes at Pilchuck, Session 7 was an open-studio session where students were free to work in all areas of the campus. This session attracted students of all levels and backgrounds many using the open studio experience as a chance to explore glass for the first time. A diverse and intriguing programme was on offer from instructors Róisín de Buitléar (hotshop), Fred Curtis (coldshop), Walter Lieberman (glass painting), Armelle Bouchet O’Neill (kilnforming) and Amber Cowan (flameshop).The enthusiasm of the students, the knowledge, skill and personalities of the instructors and the addition of inspirational live-wire Laura Donefer as the Artist in Residence into the mix resulted in the creation of some distinct, exciting, experimental art and enthralled students.

This was my first time at Pilchuck and I was both delighted and nervous to be tasked with serving as a Teaching Assistant (TA) to the great Fred Curtis, Master Glass-Cutter from the Waterford Crystal Factory. I spent my time in Pilchuck’s fantastic cold shop, organising materials and equipment and attending to the students. Despite being a fellow Wexfordian, this was my first time meeting the famous Fred. My glassy adventure began at the Museum of Glass in Tacoma, where I met Róisín, Fred and Antoine Brodin (one of Roisin’s TA’s). The ground-breaking Caution Fragile! Exhibition was just about to come down. It was really great to witness such inspirational pieces of Irish Glass in such an important international venue. I was delighted to get the chance to see it before the end.

My day at the museum set the tone of the trip; I was already in awe of Fred, relaxed, laughing and surrounded by Irish artists. For such a small nation we were exceptionally well represented that session, to to the roll call there was: Róisín De Buitléar, Fred Curtis, Meadhbh McIlgorm, Aoife Soden, Andrea Spencer (English but now lives in Antrim so we’re claiming her), Rozarii Lynch (Irish now living in Seattle) and myself – plus other honorary Irish (shout out to Conor McClellan Fred’s other TA, Irish in name)! It was great to see the appreciation that the students and staff, including the other instructors, showed towards us, with Fred being held in particularly high esteem. His reputation had definitely crossed the Atlantic with his demonstrations attracting the awe and complete attention of the audience. His cold shop grew in popularity throughout the week with students of all abilities getting their first experience of the infinite possibilities of cold glass.

The week was a whirlwind – nonstop from start to finish. The campus was a real hive of activity with artist talks on all week when we weren’t making use of the world class facilities. Two talks of note were presented by our own Róisín De Buitléar and Fred Curtis. Róisín gave an excellent heartfelt presentation on the plight of Waterford Crystal and her work in response to this. Fred’s slide show took a different direction with a montage of some of his most famous and technically ingenious pieces. Its fair to say there were a few amazed expressions while Fred presided over the room.

The old mantra of “work hard play hard” definitely rang true in the misty mountains of the Pacific Northwest. There was a real sense of fun about the entire week and this manifested itself in a number of interesting guises: From the tamer pursuit of hiking up the mountain to inspiration point – bottle of wine in tow and floating along the lake with fellow Irish TA Aoife Soden, to some more exuberant activities including an end of session hot shop party, dancing in the ‘Trojan Horse’ and the international athletic extravaganza that was the Pilchuck Olympics. With such a frantic week in the creative bubble of Pilchuck Fred, Aoife, Antoine and I eased ourselves back into the real world with a visit to the Dale Chihluly Gardens and Glass before leaving. A fantastic end to a truly ‘awesome’ week! 😉